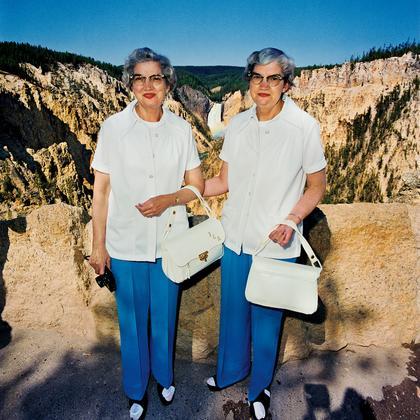 In 1872 President Ulysses. S. Grant signed Yellowstone National Park into existence as the first national park. The original law passed defines the newly minted national park as “[the tract of land] dedicated and set apart as a public park or pleasuring-ground for the benefit and the enjoyment of the people.” (Foundation Document, 32) That the park should be used and enjoyed by people was essential to its identity as a national park and as a resource for United States citizens. National park landscapes were initially the prevailing mode of park representation. However, photographs that incorporate people reflect the established functions of the parks, explicit and implicit, both immediately following and long after their establishment. This exhibit examines photography of people within the parks-specifically tourists and NPS employees- in order to understand how the visual culture either promotes or subverts the preeminent notions of the relationship. These images reflect the ways in which park culture has invited specific communities and excluded others, has dislocated indigenous cultures, and also speaks to both the realities and idealities of park tourism from the parks' origins until now. It seeks to understand who "you" is and how they relate to these spaces.